Michigan State University scientists have identified how a single gene in honey bees separates the queens from the workers. A team of scientists unraveled the gene’s inner workings. The gene, which is responsible for leg and wing development, plays a crucial role in the evolution of bees’ ability to carry pollen. 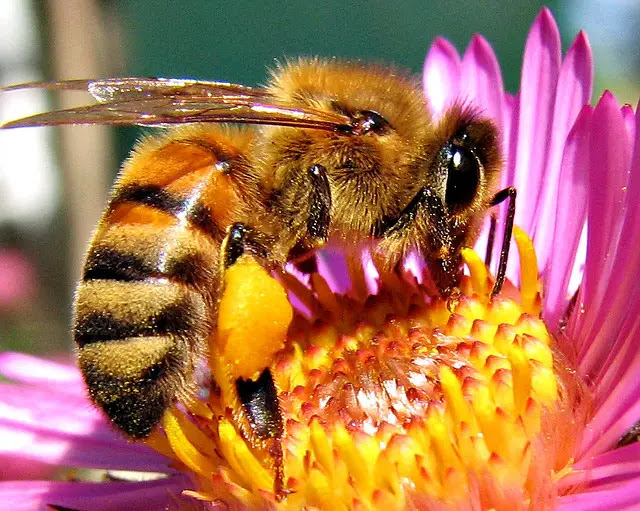 Scientists have identified how a single gene in honey bees separates the queens from the workers.

A team of scientists from Michigan State University and Wayne State University unraveled the gene’s inner workings and published the results in the current issue of Biology Letters. The gene, which is responsible for leg and wing development, plays a crucial role in the evolution of bees’ ability to carry pollen.

“This gene is critical in making the hind legs of workers distinct so they have the physical features necessary to carry pollen,” said Zachary Huang, MSU entomologist. “Other studies have shed some light on this gene’s role in this realm, but our team examined in great detail how the modifications take place.”

The gene in question is known as Ultrabithorax, or Ubx. Specifically, the gene allows workers to develop a smooth spot on their hind legs that hosts their pollen baskets. On another part of their legs, the gene promotes the formation of 11 neatly spaced bristles, a section known as the “pollen comb.”

The gene also promotes the development of a pollen press, a protrusion also found on hind legs, that helps pack and transport pollen back to the hive.

While workers have these distinct features, queens do not. The research team was able to confirm this by isolating and silencing Ubx, the target gene. This made the pollen baskets, specialized leg features used to collect and transport pollen, completely disappear. It also inhibited the growth of pollen combs and reduced the size of pollen presses.

In bumble bees, which are in the same family as honey bees, queens have pollen baskets similar to workers. In this species, Ubx played a similar role in modifying hind legs because the gene is more highly expressed in hind legs compared to front and mid legs.

Besides honey bees, which aren’t native to North America, there are more than 300 species of other bees in Michigan alone. These include solitary leaf cutter bees, communal sweat bees and social bumble bees.

“The pollen baskets are much less elaborate or completely absent in bees that are less socially complex,” Huang said. “We conclude that the evolution of pollen baskets is a major innovation among social insects and is tied directly to more-complex social behaviors.”

Future research includes investigating how bees could be improved to become better pollinators. While this won’t provide a solution to bee colony collapse disorder, it could provide an option for improving the shrinking population of bees’ pollen-collecting capacity.