Scientists say they have found the “missing link” in the debate over the risk of pesticides to bees.

This accounts for discrepancies between lab and field studies, they report in Royal Society Journal Proceedings B.

A Europe-wide ban on neonicotinoid use on flowering crops is due to be reviewed at the end of the year.

It was introduced two years ago.

The population inside the hive was able to compensate for the increased loss of worker honeybees by increasing brood production Dr Mickael Henry, INRA, Avignon

The debate over the use of neonics has centered on discrepancies between toxicity assessments in the laboratory, where bees are dosed artificially with insecticide, and the findings of field trials in the countryside.

The big unanswered question is whether harmful effects seen in lab studies occur in real-life conditions and cause population declines.

The new research provides an explanation for the “missing link”, say French researchers.

Their monitoring of tagged honeybees in the wild suggests bees foraging around treated crops die off at a faster rate than normal.

However, colonies are able to make up for those dying off by boosting the number of worker bees in the hive.

Lead researcher Dr Mickael Henry of the French National Institute for Agricultural Research, INRA, in Avignon, said the average life expectancy for an individual honeybee foraging on crops treated with neonics is lower than expected.

He told BBC News: “We could find evidence of troubles at the individual scale in the field but these troubles were compensated for by the colonies.

“The population inside the hive was able to compensate for the increased loss of worker honeybees by increasing brood production.” 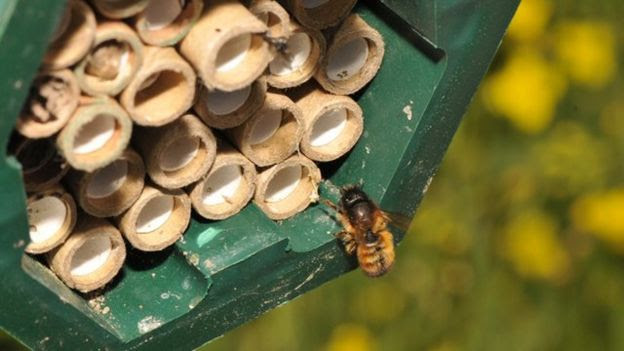 A field study found harmful effects on the solitary bee 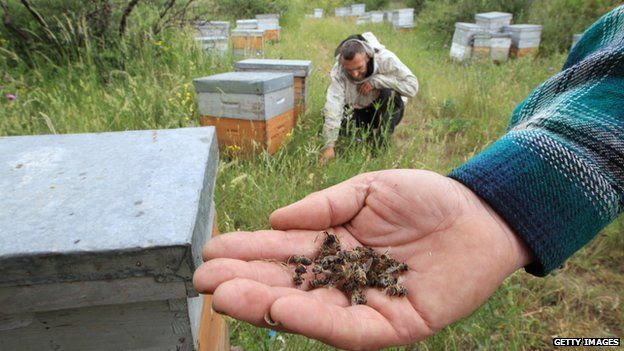 Dr Scott Hayward of the University of Birmingham, who was not connected with the study, said the work “re-ignites arguments to ban neonics”, and similar studies are now needed on other pollinator species.

His comments were echoed by Dr Christopher Connolly of the University of Dundee.

“It is important to remember that all other insect pollinators do not possess the enormous buffering capacity of honeybees and are therefore more acutely at risk to the impact of pesticides,” he said.

Dr Peter Campbell of the pesticide manufacturer Syngenta said while the study raised unanswered questions “reassuringly… there were still no effects reported at the colony level”.

And Dr Alan Dewar of Dewar Crop Protection Ltd, added: “The conclusions from this work, which are very simple in contrast to the study itself, show that bees, or at least honey bees, can compensate for adverse effects of pesticides in their environment.”

Bees are in decline in Europe and North America due to a number of factors, including pesticides, habitat loss and diseases.

Neonicotinoids contain synthetic chemicals similar to nicotine, which as a plant toxin is damaging to insects.

In the UK, the government has temporarily lifted a ban on neonicotinoid pesticides in parts of England.

Two neonicotinoid pesticides can be used in four counties on oilseed rape crops following an emergency application by the National Farmers Union.

The Department for Environment, Food and Rural Affairs said the EU Commission had introduced precautionary restrictions on neonicotinoids from December 2013, which the UK had fully implemented.

A spokesman added: “The Government makes decisions on pesticides based on the recommendations of senior scientists and independent experts who have looked at the best available scientific evidence.

“The Commission has now begun a review of the science relating to neonicotinoids and bees, and the UK will contribute fully to this review.”