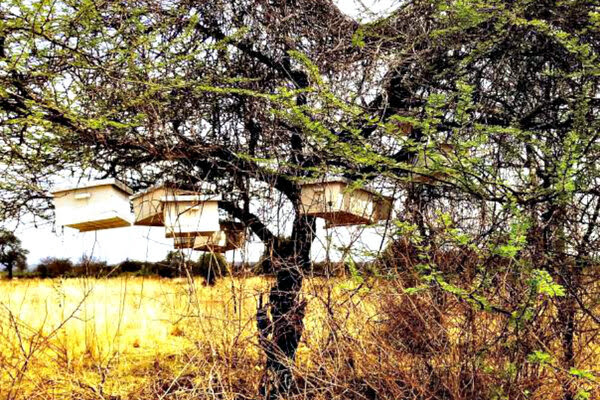 “The business terrain is rough and bumpy, and only meant for those who can raise again when they fall,” says Kathy Mbondo, an entrepreneur who speaks from her own experience.

Mbondo was exporting flowers in 2011 when the euro crisis happened and her business was wiped out in two months. In the spirit of entrepreneurship, in 2014 she ventured into traditional vegetables farming, which did not work out well either. In March 2015 after thinking about what to pursue, she realized there was a resource in her home village that had a lot of potential but had not been exploited.

Mbondo comes from Makueni County, Kenya, an area that receives low rainfall, which translates to low agricultural productivity. Climate change is taking its toll in the region as unpredictable rainfall patterns have led to shifts in planting time.

Traditionally communities in Makueni kept bees, but many farmers gave up on the trade due to poor honey prices. Brokers would buy the honey for as low as 50 Kenya shillings (50 cents). Mbondo realized that farmers could fetch better prices for honey if only she would get a market for them.

In her village, people cut down acacia trees to make charcoal, which contributes to deforestation. To conserve the trees, Mbondo came up with the “every acacia for a hive” project that encourages farmers to put hives on acacia trees instead of cutting them down.

“I sell the economic value of the beehive to the farmers,” Mbondo says.

What she tells them is this: When you cut down an acacia tree and convert it to charcoal, you make a maximum of four bags, which in total fetch 1,000 [shillings, $10]. When you put a single bee hive on the same acacia tree, you will harvest 20 kilograms [44 lbs.] of honey each year. Each kilogram of honey sold to Proactive Merit goes for 250 shillings, which translates to 5,000 shillings ($50) per year, she explained.

Proactive Merit is the company founded by Mbondo that buys honey from farmers.

Mbondo has 50 hives on her parents’ farm – a number that she has built over the last seven months. Her goal for 2016 is to purchase 10 tons of honey from farmers, package it, and sell it. The honey goes by the brand name Nature, and she is now selling through several retail outlets in Nairobi.

The honey by Proactive Merit is “raw honey” that is collected straight from the hive into the honey jar. It is totally unheated, unpasteurized, and unprocessed. This ensures that all the natural vitamins, living enzymes, and other nutritional elements are preserved.

In doing the business, Mbondo has faced some challenges like getting working capital that she can use to buy honey in bulk during the peak season. Honey is seasonal and is readily available just after the rains, then the supply goes down during the dry season. In addition, a locally produced bee hive goes for 5,000 shillings ($50), which many farmers cannot afford.

She plans to set up a revolving fund that will enable farmers to get the hives and pay in installments over a period of time.

Mbondo has a few words to share with budding entrepreneurs. She says, “look for that one thing that you have passion for and just work with it in a spectacular manner. As long as you have passion, passion precedes the money factor, and money will follow you. If it is value addition, passion helps you to think outside the box ,and you will be able to persuade the market to come buy from you.”

“Follow your passion, forget copy and paste, do your thing. If it is honey, find a way of making your honey different from everyone else in the market. Find out and just do it, focus on it and do it repeatedly. Don’t give up,” she added.

Mbondo is confident that the “every acacia for a hive” project will conserve the acacia trees in her village because the honey comes with repeat income as opposed to cutting down the trees, which has only a one-off income and also destroys the environment.

Proactive Merit is also diversifying its products because Mbondo believes “the opportunity in honey is as versatile as water. There are so many entrepreneurs in the clean drinking water industry, yet every day there are more bottled water businesses coming up and each is able to get a market share. The same case applies to honey, which is widely used in the cosmetics and food industries.”

• Esther Kahinga, @estakahinga, is a communication and knowledge manager officer at the Kenya Climate Innovation Center.