Colonies of the Eastern honey bee, the original host of parasitic Varroa destructor mites, survive infestations that are fatal to Western honey bees.

A research team from Agroscope and the Institute of Bee Health at the University of Bern (both Switzerland), together with partners from Thailand and China discovered that a large proportion of infested Eastern honey bee larvae die, prompting their elimination from the colony, together with that of their parasites. Counter-intuitively, weak individuals contribute to society survival by preventing the parasite to spread. This is an example of how altruistic suicide can be favoured by nature.

There is a general consensus that the parasitic mite Varroa destructor is the greatest biological threat to the health of Western honey bees, globally. This parasite endangers honey bee survival, which may in turn negatively impact pollination services crucial to food security and to the maintenance of biodiversity.

“Sustainable control of this parasite is hampered by our limited understanding of how the original host of this mite, the Eastern honey bee, defends itself,” says senior author Vincent Dietemann from Agroscope. “With this study, we wanted identify resistance factors that allow colonies of the Eastern honey bees to control and survive infestations of this parasite,” adds lead author Paul Page from both Agroscope and Institute of Bee Health at the University of Bern, who has been working on this project for the past three years.

A joint research team from Agroscope at the Swiss Confederation and from the Institute of Bee Health at the University of Bern (Switzerland), together with partners from Chiang Mai University (Thailand) and Zhejiang University (China), recently reported a newly identified behavior and a previously unknown purpose of altruistic suicide in the Eastern honey bee in an article in the open-access journalScientific Reports (Nature Publishing Group).

“The behavior is comparable to that of honey bee workers that lose their lives when they defend their colonies. Their sting apparatus detaches from their body to remain in the intruder, which results in a fatal hemorrhage,” explains Zheguang Lin from Zhejiang University, who also contributed to the work.

The nature of the new evidence is experimental and based on the observation of individual susceptibility to parasitism. Infested larvae of the Eastern honey bee are more susceptible to Varroa mites compared to A. mellifera and die faster. This observation suggests that this weakness has evolved to enable more efficient social immunity. Indeed, weak and dead larvae, together with their parasites, are expelled from the colony by their siblings, preventing the mites to spread. The greater susceptibility of individuals to infestation, although leading to their death, is favored by natural selection since colony survival is increased.

The findings are significant for those studying sociality in insects since they shed a new light on how individuals cooperate in the face of parasitism: it is not necessarily “strong” individuals that foster the survival of a colony of honey bees, but counter-intuitively, it might be that it is the “weak” (i.e. susceptible) individuals that do. The results also have major field implications for beekeepers. Over the past 20 years, breeding attempts for Western honey bee survival in the presence of the parasite has not yielded a satisfying solution. Co-author Peter Neumann from the Institute of Bee Health states “considering individual susceptibility in breeding programs will improve colony health and contribute to a more sustainable global apiculture.” 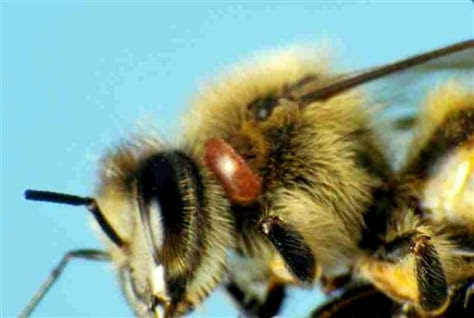 Honey bee colonies are attractive heavens for numerous organisms. The close proximity of thousands of hosts in a small, warm and humid nest provides ideal conditions for numerous parasites or pathogens to develop and thrive. With the global trade of honey bees, natural boundaries between species are overcome and parasites and pathogens specific to particular species are put into contact with new potential host species that lack natural defenses against them. The Varroa mite has thus benefited from human activities to reach a near worldwide distribution within a century.

Honey bees, like all pollinators, provide crucial ecosystem and economic services. In Europe and North America, millions of honey bee colonies produce honey and contribute to the pollination of a broad range of agricultural crops — from carrots to almonds to oilseed rape — that are valued at over 150 billions Euros globally.

The above post is reprinted from materials provided by University of Bern..